The rain was pouring down as I approached the shrine. Rain like we never have in Norway, never downpours like this. A deluge of water coming from the skies, not a dry spot to be found. Except under my umbrella. Under here it was still nice and warm. The rain did not make the temperatures drop, it was still just over 30 degrees. The trepidation only increased the humidity, making it feel even warmer. I wasn’t 100% dry under my umbrella. I was sweating heavily. 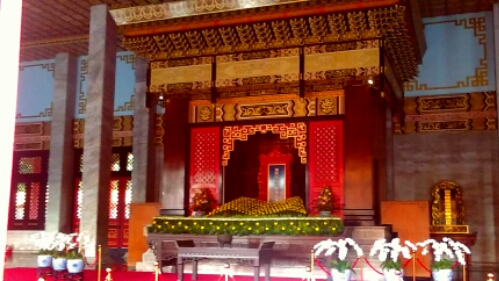 I had opted to walk from the metro to the Martyrs’ shrine, most other visitors that day came with tour buses. The entrance to the shrine was easy to spot as I approached, even under my big umbrella. Multiple tourist buses, Chinese mostly, were parked just outside. A large group of tourist had congregated around the two honour guards stationed in their finest uniforms just outside the entrance to the shrine. Never moving, but always watching. The soldiers that is. The tourists were moving a lot, and probably seeing less. I walked by them quickly. Conditions had to be better on my return. Either less rain or fewer tourists. Or hopefully both. Now I just wanted to get inside the shrine. Get out of the rain. My umbrella might keep my upper body dry, but my shoes were soaking wet.

A large open square lay ahead of me, at the end of it lay the shrine. The rain on the polished cobblestones created a beautiful mirror-like effect, the view was simply stunning. The shrine shined in bright orange in the distance, beckoning me to come closer. Brave the rain. The umbrella will keep you dry. Your shoes are wet anyway. The square and the shrine lay completely empty in front of me. 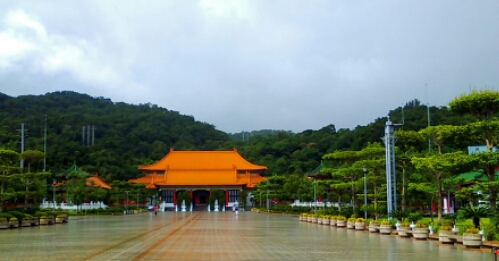 Walking up to the shrine

Two more honour gards were standing right in front of the shrine. Like their comrades by the entrance they were standing just under the roof, they just kept dry, the rain missing them by just a few centimeters. Around the shrine lay a walkway, under cover luckily, and on the walls were paintings of old battles and placards next to them with text telling the story of the battle. I started to walk down the walkway, stopping to look at the paintings and read their history when a man working at the shrine approached me. The changing of the Guards Ceremony would begin soon, he advised me to come see it. As a former member of the Norwegian King’s Guard Drill Squad I was anxious to see military tattoo in Taiwan, and went with him to watch.

There are honour guards stationed at various shrines and Memorial Halls in Taipei, during my visit I got to witness three Changing of the Guards Ceremonies. At Sun Yat-sen Memorial Hall I came just as they finished, and did not get to see the full ceremony. At Chiang Kai-shek Memorial Hall I saw the whole ceremony, but it was very crowded and many people blocking my view. Here I got  great view of the ceremony, but due to the weather the guards’ routine was cut short. I remember myself how rain made the weapon slippery and impossible to handle. In this downpour I did not blame them for doing a shorter program. 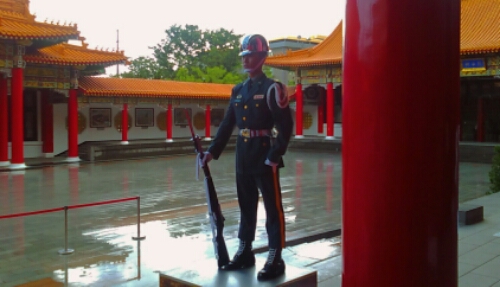 One of the honour guards

As the ceremony ended, new guards in place, the ones up for a break marching away, I once again walk the pathway telling the story of the wars of the Republic of China. Painings and portraits of battles and military leaders, and posters writing out the story behind each picture. I slowly walk down the corridor, stopping at every picture and poster to watch and read. 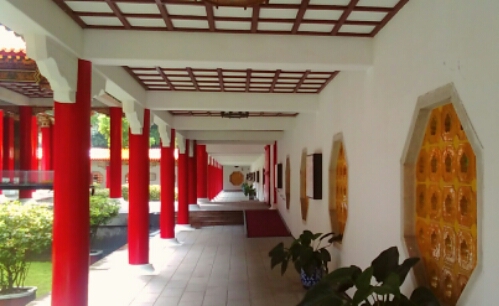 The National Revolutionary Martyrs’ Shrine in Taipei commemorates all those who gave their life in war for the Republic of China (ROC). Housed within the shrine are the spirit tablets of 390,000 Chinese who have died in the service of the ROC army. Most soldiers commemorated here were actually born in mainland China, as the Taiwanese or ROC government see their rule a continuation of the Republic of China that excisted on the mainland. The shrine is guarded every day by honour guards from different branches of military, and their ceremonial Changing of the Guards every hour has become quite the tourist attraction.

In the end I returned to the honour guards to give them a closer inspection. The two of them were standing perfectly still just outside the shrine. Facing each other. Weapon in hand. I walked up to one of the, looked closer at the gun. It was an M1 Garand, the same weapon we had used in the drill squad in Norway. A weapon very nicely weighted for spinning and throwing around. It was 13 years since I was in the military, I still remember the different things we did with our weapon. They were hammered into us. We did our routine without thinking. 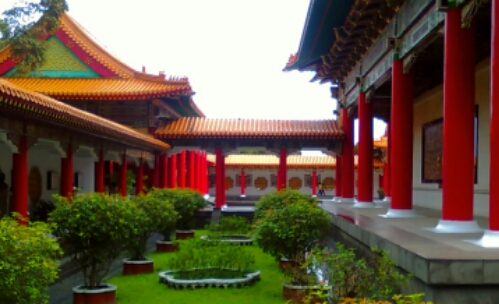 The inside of the shrine is beautiful

It had stopped raining. I had my umbrella folded up. As I walked from the shrine I pretended it was a rifle and I was back in the drill squad. Performing the different drills I had learned.