‘Oh yeah,’ he said as I showed him the picture. ‘There is always some kind of protest going on now. Many people oppose the stance the government has taken towards China’ he continued. His English quite good for a Taiwanese. Sometimes he searched a little for what to say, sometimes he had to ask his girlfriend for a word in English, but most of the time he had no problem conversing.

‘Especially young people feel Taiwan should break off ties with China. Too much trade is done with China and we are becoming too dependent on them. We should look to the rest of the world instead. Taiwan has much to offer.’

He took another sip from his beer, looked at me. ‘You know the Sunflower Movement, right?’

We were sitting in a bar in Shilin Night Market. The bar was supposed to have closed a long time ago, but kept open for me and a few other. Now we were all sitting outside, drinking beer and discussing politics. The night market was closed for the night. So much more quiet than a few hours earlier. Now it was only us here.

On my way to the market I had passed a protest in Ximen, about a hundred people holding big banners, something in Chinese written on them. Not blocking traffic like they would in Europe or the US. Here they patiently waited on the sidewalk for the light, and crossed the intersection every time it went green. A very polite form of protests. I had snapped a few pictures of the protesters, wondering what they were protesting for or against and asked at the bar what it was all about. 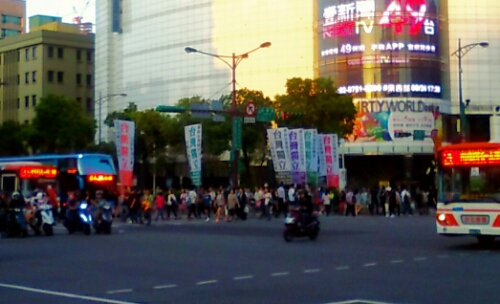 The Sunflower Movement was a student protest in Taiwan in March and April, 2014, taking its name from the flowers used by the protesters as a symbol of hope. The ruling KMT party were about to sign a trade agreement with China, the Cross-Strait Service Trade Agreement (CSSTA), an agreement aimed at making trade in services between the two countries easier. Before passing the agreement, students and NGOs would protest the agreement, fearing that it would make Taiwan more easy to manipulate from Beijing, that it would hurt the Taiwanese economy, and concerned that the agreement had not gone through a clause-by-clause review as promised. As certain academics claimed, an agreement with a huge impact on the economic and political landscape of Taiwan was passed in a ‘black box’, with the people left unaware of the exact terms and impacts of the trade agreement.

On March 18, 2014 a crowd of protesters stormed the legislative chamber in Taiwan to occupy the legislative floor. They held the floor all day and night, bringing several attempts by the police to force them out to a halt. The protestors vowed to occupy the building until March 21, when the CSSTA was scheduled to be passed. The protest soon spread throughout the country, and riot police were mobilised all over to Taiwan to  surround the protesters, by peaceful means it was promised.

The government refused to budge, so did the protesters, and the occupation kept going. On March 23 President Ma held a press conference where he promised to continue with passing the piece of legislation, and that he would not be pressured in any way by either the protesters or Beijing. The student responded to this press conference by storming the executive floor. They were evicted the next day, but continued to occupy the legislative floor and to protest outside, in the city of Taipei and across the country. The Sunflower Movement continued.

On April 6 the government finally conceded, promising to stop any further progress in passing the CSSTA until legislation was put in place to monitor all cross-strait agreements. The student protesters holding the legislative floor responded by evacuating the premises, but not before cleaning the place, leaving it in perfect conditions. The CSSTA is sill not ratified by Taiwan. 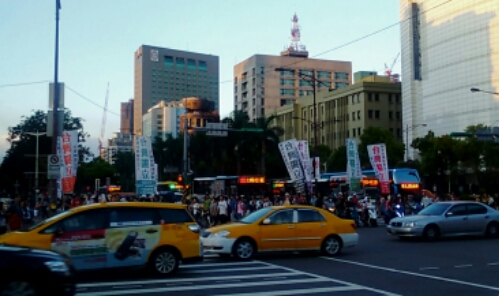 I went to the bar to grab another beer before he continued. I was getting a great lecture in Taiwanese politics, and what better place and time to get it than in a bar at 3 am. I sat down on my bar stool an asked him to continue.

‘Many people feel the ruling party is too close to China. Especially young people. We should separate from China, we should be Taiwan instead. The government still wants to be China in a way, want to be Republic of China. But in reality we are Taiwan.’

Ever since Chinese nationalists fled the mainland to set up a government in Taiwan, The Republic of China, relations between China and Taiwan has been strained. Both countries claim to be the legitimate government of China, and the other an imposter. With several trade agreements being signed in recent years, many people, especially the young, feel Taiwan is becoming too tied up with China. Taiwan should go its own way, they said. Taiwan should not get too close to China. The Sunflower Movement managed to halt a new trade agreement from being ratified, at least slowing the process of economic integration with China down. It will be interesting to see what the future brings.

I left not long after that, it was late and I was sleepy. I hailed a taxi outside the metro station, it was about a ten minute drive to my apartment in the Ximen District. On the way home I went over what I had learned tonight. I came to Taiwan with hardly any knowledge of the country, no expectations. Ready to discover the country without any preconceptions. That is how I like to travel. Travel first, study later. When I got home I started reading a lot about Taiwan. But when I first came there I knew nothing. And this night I learned a lot. A lesson in politics and history, a small glimpse into the thoughts of the young in Taiwan. I learned of the Sunflower Movement.

15 thoughts on “The Sunflower Movement”