I visited Lungshan Temple in Taipei in September 2016

Lungshan Temple was only a few hundred meters from the metro station. Just walk past a park and you were there. The park was full of old men sitting around, playing games between themselves, or just talking. I walked past them. Towards the temple. It was easy to spot. A huge crowd was gathered in front of it, people passing through the gates constantly. And a massive neon sign was flashing above the entrance. I crossed the road and passed through its gates.

The only other Asian country I have been to so far is Japan, so I can only compare the temple to Japanese temples. Lungshan Temple in Taipei felt more alive, more of a temple in use. The temple was crowded with shrines and worshippers, people standing in lines to worship in front of the more popular shrines and deities. Tables in front of the different deities were laden with foodstuff, offerings from the worshippers visiting the temple. All kinds of fruits, tea and vegetables, but also canned food, breakfast cereal, sweets and cookies. In front of the different deities several people were kneeling and praying, reciting from scrolls and books they had brough, or just praying in silence. Everyone bowing constantly. 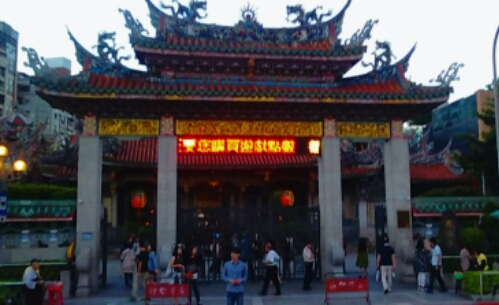 In Japan temples and shrines feel more like attractions to visit, places to go to on a day off or just places to visit by habit, by routine. People rush by, a quick prayer and a bow, or families come to linger for a long time, letting their kids run around freely, away from the cars and traffic on the streets of Tokyo. Japanese temples makes you wonder if there is a religion in Japan, or just a set of cultural expressions and habits, formalised and set in a system, handed down through generations. In Taiwan religion felt very much alive. 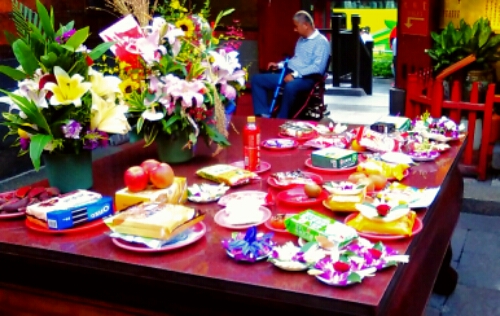 The offers of food

The whole temple complex was crowded with people, a few westerners but mostly local worshippers and Chinese and Japanese tourists. It was a big temple. In front was the main temple yard with a massive shrine as its focal point. Two small alleys on each side of the shrine led to several more shrines and deities, these ones smaller. A wide choice of deities to pray too. I took a walk around the whole temple first, looked closer at a few statues, tables of food, the carvings on the walls here, before sitting down against a wall in the temple yard, letting my feet relax while just looking at the people here. 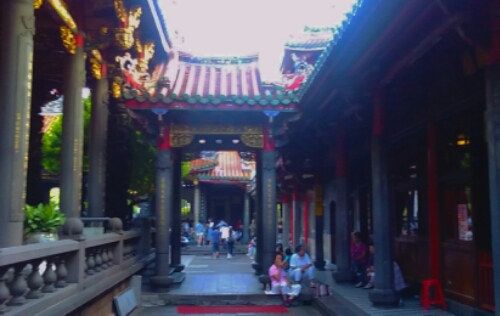 Walking around in Lungshan Temple in Taipei

It is a beautiful temple. The amount of detail on the wood carvings on the building is astonishing. And every building is covered in wood carvings. And the colors. Earthen colors. Brown walls. A dusty courtyard. But with hints of bright red. And some of the decorations are painted in all colors of the rainbow. Bright green, purle, yellow. Orange. Together they work perfectly. The temple looks beautiful. I spent a long time just sitting by the wall, looking around. Taking in the view.

As I was leaving I bought a small charm promising me long life and prosperity. Not really believing in it, at least it makes a nice and cheap souvenir. The swastika on the wrapping did not put me off anymore. I have seen it in temples all over Taiwan and Japan. Most of the time with its arms turning the other way to the infamous German one. A reminder that it was a religious symbol long before the Nazis started using it. 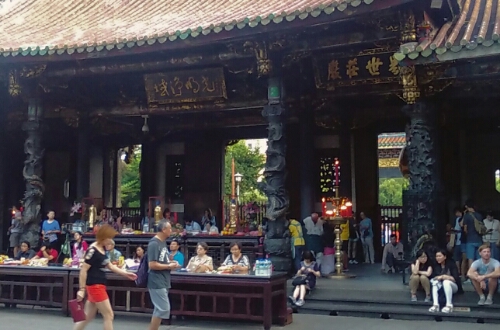 In front of the main shrine

It was only about half an hour walk to get to my apartment Google Maps told me. Rather than take the metro I opted to walk. A great way to see a part of the city I had not been to yet. I stopped at a 7-eleven to pick up some drinks and snacks for the road, then set off down the street in the general direction of Ximen and my airbnb apartment. Refreshed and at ease after a relaxing visit to a beautiful temple.

12 thoughts on “Lungshan Temple in Taipei”